Wanna Be Happy in a Million Ways? 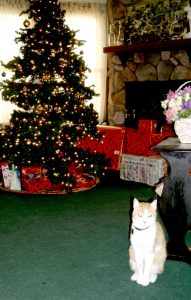 That is always an ideal objective, although being happy just one way will work for me quite often!  I stole that line from the famous Christmas tune by  Perry Como, There’s No Place like Home for the Holidays. This type of Christmas music from that bygone era we hear seems to be loved by all – and you’ll notice many of them are all carry-overs from the post world war II era up through the sixties. Makes one want to think about when the best time period to be alive in our history must have been.  Seems most of that stems from an observation of our society and compares to how things were.  But in reality, if you really want to be objective about it,  there are so many strong, valid arguments on both sides that are all endless and have no conclusion.

I thought about it awhile and realize it’s a mixed bag– Just as it likely was for folks back then!  My parents came from the older generation that grew up during the great depression.  My father shot a lot of home movies and judging from the state of happiness both seem to show, it could easily be concluded that the 50’s and maybe early 60’s were a joyous time.  But read between the lines, and my father who eventually was a writer with the Defense Dept. had to deal with the prospect of being sent to cover the cuban missile crisis (and later Vietnam) and being told his family could not know how severe the stakes were.  There was organized procedures he adhered to in the event nuclear war broke out and how until then, there may be family separation or whereabouts of himself unknown that we would have to endure back in Ohio.  Yet there were extraordinary elated times when relatives would come together at reunions and have real meaningful discussions about where most had come from economically speaking.  And that can be argued by  new immigrants to America that settled, assimilated and are proud americans today.  Their skin might not necessarily be white, nor have roots from Europe, but the mechanism is largely the same discussions and elated feelings if one were to compare those home movies from that bygone era to videos today of the same societal events- a reunion at a park and grilling barbecue and extended family members running around.

It’s all “relatively speaking”  as the one thing I can conclude.  What is relevant is the overall health, wellbeing, comfort level and options offered to an individual today in American Society. The subject matter and values can be easily compared and there likely is not much of an argument.  But did the “spirit” of humanity really change, overall?  On the one hand, you read of mass shootings, graffiti laden neighborhoods,  vulgar language being used at will in public places.  Less regard for human life- more competition for one’s place, and on and on.

There really are many excuses to not choose to be happy, just as there are many ways to be happy –  I only seem to think you need just one ok, I’ll say two, ways to be happy.  That is the ability to understand and practice acceptance and freedom.  From there I think love and appreciation is more easily fostered.  What I grew up about Christianity has remained unchanged overall and that makes me pretty happy.  It certainly isn’t a crime to express a loving emotion (within reason) nor to practice one’s religion.  Beyond that, I think there is a changed world for which familiarity sometimes ceases and has me, at least, questioning my acceptance or “happiness about it”.

It sure is comforting taking a cruise in my car with power steering, and not having to change the tires as often as in the old days.  It’s comforting having the modern conveniences around and expecting them to work rather than being elated that they do and having a celebration! How unhappy we felt at the prospect of a refrigerator breaking down, and accessing an available repairman without expecting to likely have to wait a much longer time period than today.  How rotten it is that our healthcare system isn’t what it use to be.  How grateful we are while we are healthy however– So that is a very relative scenario.  But with improved healthcare overall and lifespans extending- I guess I feel happier about that– less scary than the time when they needed to develop the Small Pox or Polio vaccine!  The dangers like that we all had to live with,  (I think) more so during those fabulous 50’s and 60’s than as much today.  Today, there are new diseases facing us, yet  continued elation at progress made.  As scary as cancer is,  we just had a more than 90 years old ex President be deemed free of brain cancer.  That makes me happy and optimistic in that regard.

So  knowing none of us can go back in time and live in the time period of their choosing,  we have always been able to recreate bits and pieces in the current time period of our lives.  In the fifties, there were dramatic reenactments of a previous time in our history and for better or worse,  anyone of us could act on that secret desire to “wish” they could live in that time period and bring it more alive in so many ways.  With technology today,  anyone of us can get on Youtube, and draw up a particular video and watch in a matter of a few seconds.  As long as we have a PC.  But what about if you don’t have a PC?  The argument becomes people use to get together more and maybe play cards or just enjoy their living rooms; neighbors getting out of the house and socializing- But then can’t Facebook count as a means to visit?  In some respects, I say, yes.  In spirit, if there is an interaction, I feel happy.  I don’t feel as or in the say way, so to speak, but it’s a pretty cool time period to be alive and have that option.  Are the prices to be paid for all these trade-offs and comparisons worth it?  What can you do, does it matter?  I don’t see how it does. There is so much more improvement in the comfort levels of our daily lives that can’t be discounted.  Happiness at its lowest form can be that ability to engage another and receive an acknowledgment for existence- to receive an appreciation to some degree if you want to visualize it in that way.  There are so many countless ways to do this, and the only thing I can say in making a comparison is that we can choose to do it the  “ol’ skool” way or do it to current standards.  Weather we say hello via our favorite princess phone we used as a youngster  with our best friends or  that landline phone hidden at our desk in our home office when having an extra landline was a big deal, today we have the phone in our pockets!  You see, we attach that nostalgia sense and, I suppose, miss that.  So easy to make comparisons and so easy to be excused for participating in today’s society or world.  The thing is, for me,  there is no honest excuse I’ve found.  I doubt I would be any “happier” living next door to Ward Cleaver and the beaver.  For one, they probably would not like me riding past on my Harley as much (as is widely more accepted in society today). I’d be happy in a  different way, but just as happy, once I got out of town and not bothering the reserved non-riding kinfolk in town.  I could go either way.  I can understand both sides.  By understanding I could be compromising and thus likely retain more overall contentment and maybe even happiness.

So for now,  I am happy that Christmas is not a thing of the past that makes you feel like you are part of some re-enactment group from the 1950’s whenever a Frank Sinatra, or Perry Como song comes on from that era.  It is tradition that exists in TODAY’s world.  So is my 1960 Chevy Apache with no power steering.  It is still a part of our culture and warmly embraced and even admired.  When the ride is over, it certainly is sweet to push a button that raises a garage door, so I can just drive straight in without having had to get out and do that part by hand.  (Unless I wanted to!!!)